Nice views of a male Hen Harrier passing over the road as I drove through Bronant at around midday today. Also probably over a thousand gulls (largely Black-headed & Commons) in fields to the north of Bow Street.

On the 7th November I had a close encounter with a Great Grey Shrike along the road at the northernmost arm of Llyn Brianne.

Nearby two days previous a flyover Yellowhammer, 15 Brambling and what was probably a Little Bunting; calling a sharp singular 'zik' call which flew over heading south west, unfortunately I couldn't make out any plumage details on the bird. 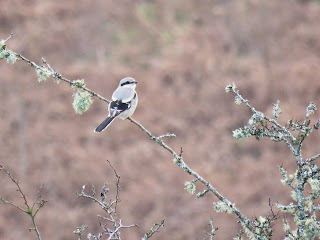