The info has just come through on the two ringed Barwits I had yesterday at Ynys Tachwedd fields. One ringed on the island of Terschelling (Netherlands) on the 15th May 2003 and has been recorded almost every year on passage in the Netherlands. The other was ringed on the 10th May 2015 on the island of Ameland (Netherlands) and has been seen a few times in the years thereafter near the area it was ringed. Quite the change of scenery this year!

This morning at Ynyslas it seemed as though the vast majority of yesterdays Bar-tailed Godwits had departed and a some of the Dunlin too. The Curlew Sand I had yesterday was quite wintery so presumably a different bird to the one seen today. Not much too add to everybody else's sightings other than my first Swift of the year heading north. 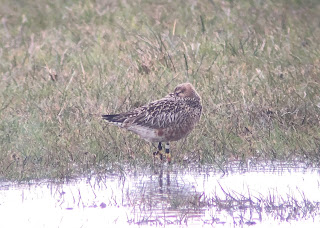