The photograph was taken by Chriistine Williams recently and sent to me by Paul Bennett on Tuesday.
Looks like a female, as Christine said, but Paul thinks it's a male in eclipse.  I agree, in which case
it is probably the bird that was at Aberaeron in 2015 in eclipse (see photo 4/8/15), when it was ringed.
For photos of the bird in splendid adult male plumage, see 11/10/16, by which time it had lost it's ring. 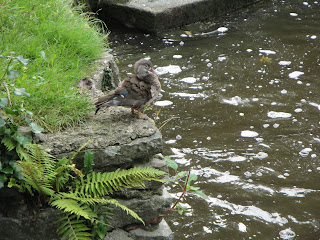