First stop this morning was Borth lifeboat from where I could see enormous numbers of gulls towards Ynyslas.  I decided to start at the estuary where the highlight was six Pink-footed Geese which flew into the Dyfi mouth before turning north over Aberdyfi.

At the brickhouse birds were streaming past, almost all northwards.  Thousands of gulls, mostly Black-headed and Herring with some Common. Great Black-backs and a few Lessers.  Also huge numbers of auks; I counted 1600 passing in 15 minutes, plus hundreds on the sea.

The large feeding rafts of gulls began to attract Gannets; up to ca 150 at the peak, but more unexpected was a single Manx Shearwater.  Eight Wigeon were on the sea off Borth with 15 Red-throated Divers between there and the brickhouse. 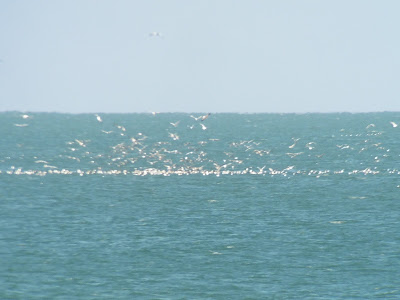