Bob  and I met up this morning at Ynys-hir for a crack at the Squacco Heron. A few other people in situ so we settled down to wait.  After an hour or so I was swearing never to twitch again, as usual on these occasions when there was a call from Martin,, who had just seen the bird flying across the far end of the field.

Luckily I got  straight on to it, as it settled first on a fence, then in a tree, still in full view.  It was still there when Bob and I left about half an hour later, so everybody got a view.

I was particularly pleased as I missed the first and only previous Ceredigion record, at Aberleri Fields in 2003. 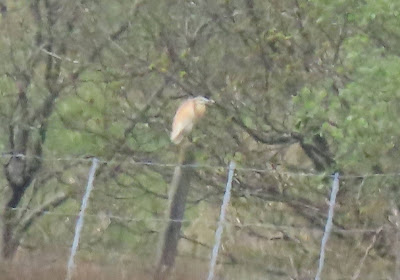 Photo taken by Martin Creasser this morning.  As Martin says,it's a record shot, but it shows the bird as we saw it..