Started this morning with a quick stop in Aberaeron to catch up with the Mandarin Drake which was just below the wooden bridge over the river by the harbour. You can see the colourful plumage starting to develop again.

Then on to Ynyslas between the Tern posts and the Leri mouth on the rising tide. I'd been there about ten mins when Harry arrived. There were 17 Curlew, 1 Whimbrel, 1 Barwit, 1 Golden Plover still in breeding plumage, 13 Dunlin, twentyish Ringed Plover, 1 Turnstone and lots of Swallows around on the mud, in fact more Swallows on the ground than Waders.
Then we went on to Borth for a short seawatch. Small parties of Common Scoters, around twenty in total, a dozen or so Manxies. A few Gannets, few birds  around.
We then went our separate ways and I finished off at Glandyfi laybi. Again few birds with the tide just falling. A Wheatear, 3 Common Sands 17 Goosanders. 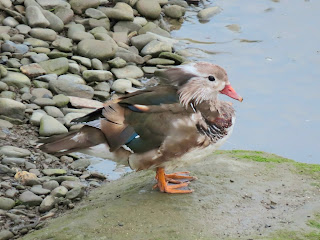 Martin Creasser.
Perhaps Martin and I should have headed for the Point after leaving the tern posts. We  kept hoping that another tern sp would join the 20 or so Sandwich.
I started at Aberystwyth where 17 Turnstones were beside the pier.
Posted by Harry Pepper at 14:28
Newer Post Older Post Home