I'd just arrived at Llanrhystud this morning when I heard a commotion. A small group of Peregrines seemed to be fighting on the beach. I grabbed the camera and took a few shots before they flew much further down the beach into the rocks. I'd realised as I was taking the shots that it was two juveniles with prey. I then saw an adult flying near them and harassing anything else flying by including two Whimbrel and two Goosanders. It was only when I got home that I realised what must have happened. I had taken 6 shots over 23 seconds. In the first shot the Pigeon is still alive. In the third, 4 seconds later it is dead. In the 6th, 23 seconds later what looks like the dominant larger chick is in Control. Shots 1 and 6 below. I think the original commotion I heard and saw was the adult bringing in live prey for them to practice on.

Other than that 2 Wheatear, a juvenile on the muck heap and a male on the shingle and a flyby of 6 Turnstones over the sea. 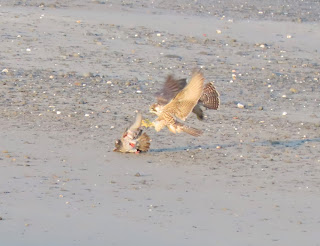 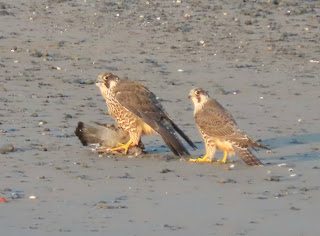